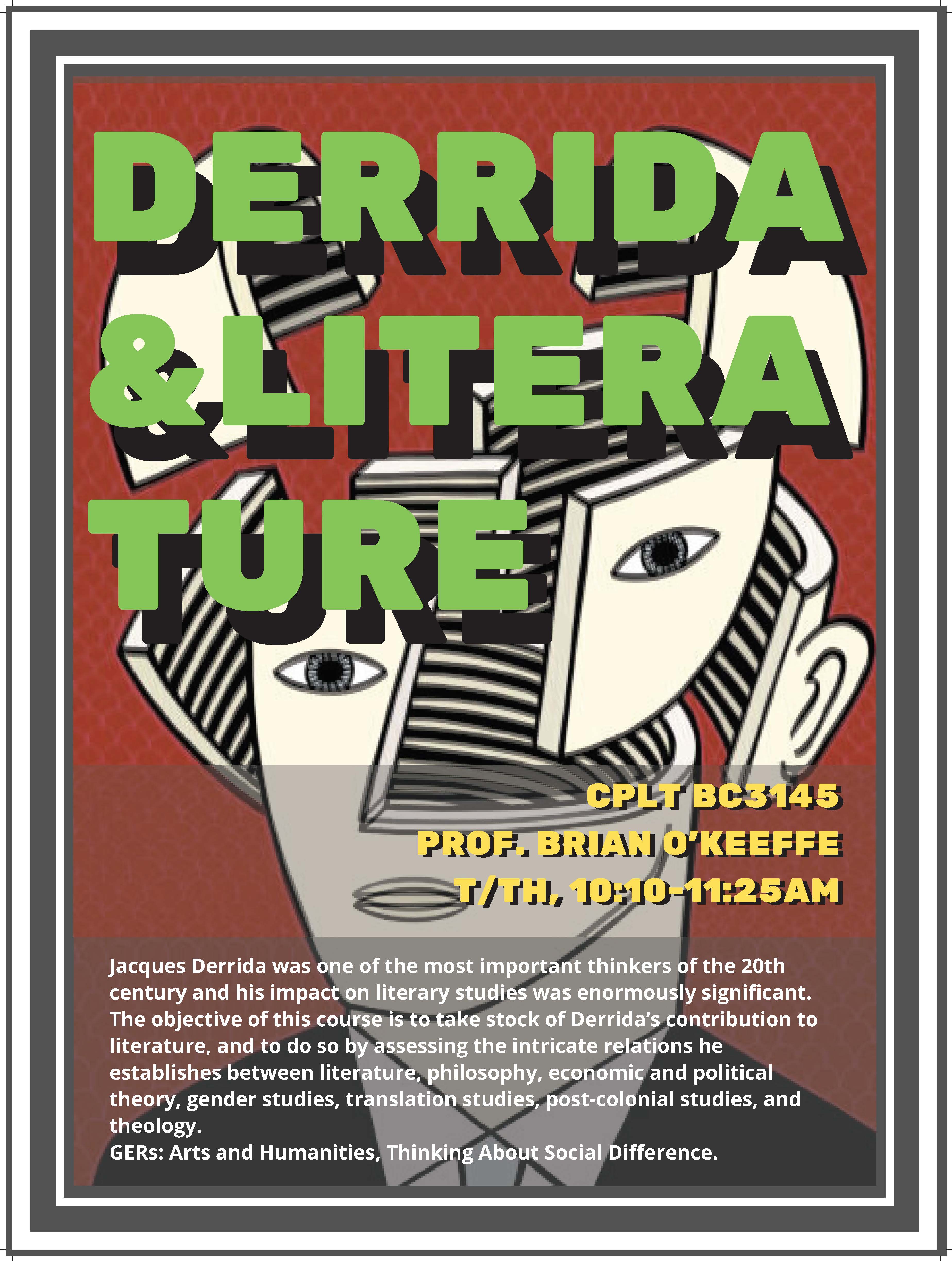 Jacques Derrida was one of the most important thinkers of the 20th century and his impact on literary studies was enormously significant. The objective of this course is to take stock of Derrida’s contribution to literature, and to do so by assessing the intricate relations he establishes between literature, philosophy, economic and political theory, gender studies, translation studies, postcolonial theory, and theology. The course is divided into six parts. Part 1 introduces Derrida’s approach to ‘deconstruction,’ particularly as regards his engagement with the fundamental concepts of Western thought and the importance he confers upon the notion of ‘writing’ itself. Part 2 examines Derrida’s autobiographical texts wherein he positions himself as a subject for deconstruction, interrogating his own gender, his sense of being an organic, creaturely life-form, the relationship he has to his own language, and the matter of his identity as French, but also as Algerian, and Jewish. While the majority of the Derrida texts we will be reading are excerpts from larger works or short essays and interviews, in this section we will read a full-length text – Monolingualism of the Other – so that we can trace Derrida’s train of thought from beginning to end. In Part 3 we will use an interview conducted by Derek Attridge, “This Strange Institution Called Literature,” as a template for thinking about Derrida’s relation to literature, and in Part 4 we will read our second full-length text by Derrida, namely Given Time 1: Counterfeit Money, an in-depth analysis of a prose poem by the French poet Charles Baudelaire. Part 5 considers an aspect of Derrida’s work that reveals the extent of his embrace of provisional, in-between positions for thought in general, and for literary texts in particular, namely translation. For deconstruction is keenly invested in words beginning with ‘trans’: transposition, transplant, trans-valuation, and indeed trans-gender. Translation provides Derrida with a scenario whereby crossings and transits can be imagined – for literary texts, and for identities that wish to remain un-determined by fixed poles or normative values. The course finishes with an assessment of Derrida’s reflections on death, mourning, and the matter of leaving a legacy. In Part 6, we therefore read more of the essay “Living On,” and also Derrida’s final interview, “Learning to Live, Finally.” Not even Derrida could deconstruct away the finality of death.